Avon Dassett is a small village that is situated within a Conservation Area and nestles on the slopes of the Burton Dassett hills.

A nature area was developed in 2009 from a small patch of land which was of limited use and situated in the centre of the village. At the time Avon Dassett lacked a village green or outdoor meeting space. The nature area provides an accessible outdoor meeting place for the whole village and is also used regularly as a picnic spot by the many walkers who walk through the village.

Avon Dassett has a Reading Room which is owned and managed by the Parish Council. The Reading Room was given to the village in 1898 as a gift from Thomas Aloysius Perry, the original owner of Bitham Hall. Thomas Perry was also responsible for the building of St. Joseph’s Catholic Church in the village.

The other church to be found in the village is the redundant Church of St. John the Baptist, a Victorian church with its soaring spire, a masterpiece that dominates the village. It was built in 1869 by Charles Buckeridge in golden Hornton sandstone, to replace a medieval church on the same site and whose east window he re-set in the west wall of the tower. Today the church is managed by The Churches Conservation Trust.

The war memorial at Avon Dassett is to be found on the Main Road through the village, opposite a bus shelter.

Two properties of note in the village are Bitham Hall and Avon Carrow.

Bitham Hall and the 5 acre gardens were built by Thomas Aloysius Perry and Joseph Knight in about 1845 and is a Grade 2 Listed Building. Knight was a leading horticulturalist and ran a successful nursery of exotic plants on the Kings Road in Chelsea in partnership with Thomas Perry, before retiring to Avon Dassett. The gardens and parkland of Bitham Hall were planted with exotic trees and shrubs including Giant Redwoods, Monkey Puzzle and a Pagoda as well as having a Paxton Orangery. Currently Bitham Hall has been redeveloped into luxury private apartments.

The other notable property in the village is Avon Carrow, a Grade 2 Listed Building. This was the former residence of John Profumo, a Member of Parliament in the 1960’s. He was involved in a sex and spy scandal in that era. Since 1983 it has been divided up into separate luxury homes.

Farnborough is a small but beautiful village and is situated within a Conservation Area.

The Village Hall at Farnborough has an interesting past as it began life as an Army hut at nearby Fenny Compton and was brought to its present site in the village by horse and cart in the 1920’s. The extension containing the kitchen and toilets were added in the 1970’s.

Farnborough has a Grade 2 Listed Inn which was built in the 16th century and is today called The Kitchen and as the name implies very much specialises in food.

Other notable buildings in the village are the Reading Room and the Old School building opposite (now used as a private day nursery). 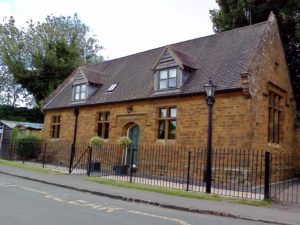 The Old Reading Room at Farnborough

The parish church is dedicated to St. Botolph’s and its origins being in the 13th century, although most of the original architecture has been altered through the

centuries, particularly the 19th. St. Botolph’s is a Grade 2 Listed Church and has a number of stained glass windows including the three light east windows by William Wailes (1856).

Farnborough Hall is a country house that has been owned by the National Trust since 1960, when the Holbech family endowed it to them, and is still run and lived in by a member of the family. It is a Grade 1 Listed Building.

The Holbech family acquired the Farnborough Estate in 1864 and the honey-coloured two storey stone house was built soon after.

Unlike many of its contemporaries, Farnborough Hall and its landscaped gardens have experienced little alteration in the last 200 years and they remain largely as William Holbech left them.

In the middle 18th century the gardens were significantly enhanced by Sanderson Miller, to dramatic effect. The land at the front of the Hall slopes downward to give a view of the lake below. To the left of the house a grassy Terrace Walk is flanked by trees and excellent views of the Warwickshire plain can be seen from here. The Terrace leads passed an Ionic Temple and an Oval Pavilion, which has two storeys and elaborate plasterwork, to an Obelisk at the end of the walk.

Warmington is still undoubtedly one of Warwickhire’s most beautiful villages, with houses built of the Hornton ironstone characteristic of the Banbury region and set in the wooded countryside beside the once notorious Warmington Hill. The traditional building style has shaped the village to its present individual appearance.

Warmington is very much a village built around a large village green with a lovely duck pond, which gives it an air of tranquillity.

Around the village green is the Manor House, a Grade 2 Listed Building, as are so many of the houses in Warmington, which is a fine and largely unaltered house.

The Plough Inn, a 16th century stone built coaching inn is nearby and has a very attractive and welcoming appearance. 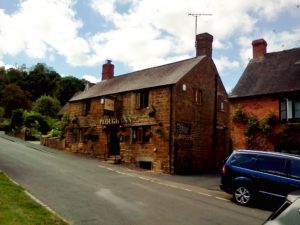 The Plough Inn at Warmington

Springfield House and the adjoining barn in School Lane is one of the oldest houses in the village. It is Grade 2 Listed and was built around 1539.

The parish Church of St. Michael’s stands high above the village, nearly at the summit of Warmington Hill, and alongside the main B4100 road. The churchyard is entered either by the lych-gate from the main road or from the village by two long and steep flights of steps. In the older part of the churchyard and especially near the south porch are gravestones from the 17th and 18th century, including several from the English Civil War. The Warmington War Memorial Cross is to be found in the churchyard.