Rugby is synonymous with Rugby Football and holds the unique position as the birthplace of the game.

It is also a busy market town with literacy and a scientific legacy.

A great way to see Rugby is to follow the Heritage Trail that leads through the town.

Rugby has its own Visitor Centre and is a good place to start your look around the town. www.enjoyrugby.co.uk

St. Andrew’s Church is in the town centre and is Rugby’s original parish church. A church has stood on the site since the 13th century. The church was extensively re-built and expanded in the 19th century, designed by William Butterfield. The expanded church included a new east tower, which has a spire 182 ft. high.

However, some parts of the older medieval church remain, most notably the 22 metre high west tower, which bears some resemblance to a castle turret. The west tower was probably built during the reign of Henry VIII (1216-1272) to serve a defensive as well as a religious role, and is Rugby’s oldest building. The church has other artefacts of medieval Rugby including the 13th century parish chest and a medieval font.

Today, St. Andrew’s is a busy and lively place at the heart of the town and with a very welcoming café (open from 10 – 2), all within a stunning building and a brilliant place to start the Church2Church Walks in Warwickshire. There is a very good ‘Welcome to St. Andrew’s’ leaflet available to help visitors appreciate this beautiful building.

Rugby School is a private co-educational day and boarding school. It is one of the oldest private schools in Britain and is one of the original seven English public schools defined by the Public Schools Act of 1868. Rugby School was founded in 1567 as a provision in the Will of Lawrence Sherriff. who had made his fortune supplying groceries to Queen Elizabeth 1 of England.

The war memorial at Rugby School can be found in a small garden area, on the right, at the junction of Little Church Street and Hillmorton Road (A428). 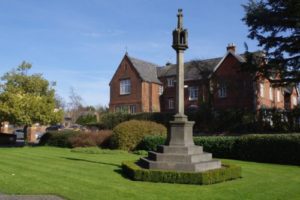 Rugby School Playing Field (The Close) was purportedly the birthplace of Rugby Football and the game owes its name to the school. The legend of William Webb Ellis and the origins of the game that took place on The Close are commemorated by a plaque. In 1845 three Rugby School pupils produced the first written rules of the ‘Rugby style of game’.

Cock Robin Wood is to be found at Cock Robin Island on the A426 (Dunchurch Road). It is mixed woodland with trees and scrubs in a natural setting around a large pond attracting a wide variety of wildlife and birds. Managed by the Warwickshire Wildlife Trust, the site has a mixture of surfaced and grassy paths. Created in 1989, Cock Robin Wood has flourished and developed into a valuable habitat for a diverse range of plants and creatures. Trees and shrubs provide nesting cover for a large variety of birds and the well established wildlife pond has become home to an assortment of aquatic life, such as dragonflies, frogs, water-boatmen and diving beetles.

Bilton Grange is a co-educational preparatory school located in Dunchurch. The mansion which forms the main school was built in 1846 attached to an existing farmhouse and was a private family home. It was designed by the eminent designer and architect Augustus Welby Pugin for a Captain Washington Hibbert and is a Grade 2 Listed Building. The first pupils were brought to the house by the Reverend Walter Earle in 1887. The brew-house was converted into the school chapel in 1869 and formal classrooms were added in 1892.

The school enjoys an estate of over 90 acres including several areas of woodland. Bilton Grange School is commonly recognised as the feeder to Rugby School, although half of each leaving year 13 year olds go on to other public schools such as Uppingham School, Eton College and Oundle School.

Dunchurch for centuries was an important staging post on the coaching roads between London to Holyhead (now the A45 road) (classified as B4429 through the village) and the Oxford to Leicester (now the A426 road). At one point 40 stagecoaches and the regular Mail coach every day would stop at Dunchurch. Coaching inns developed in Dunchurch to accommodate all these visitors.

Many notable people stayed in Dunchurch. Most notably in 1605 the Gunpowder Plotters spent time at the Red Lion Inn (reputed to be the private residence now called ‘Guy Fawkes House’) which can be found on the corner opposite The Green Man and alongside The Green. They stayed in Dunchurch whilst awaiting news of Guy Fawkes attempt to blow-up the Houses of Parliament. 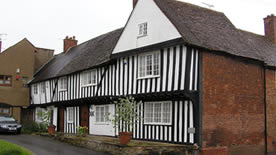 The coming of the railway in the 1840’s led to the dramatic decline in the coaching trade.

The core of this now large village has been declared a Conservation Area because it has many buildings of historical interest. Some of the buildings date to the 15th century and are timber framed and still have traditional thatch roofs.

The parish church of St. Peter’s is a Grade 2 Listed Church. A church has stood on the present site for at least 1000 years. The Doomsday Book called the village ‘Done Cerce’ and records show that there was a priest living there.

St. Peter’s Church is a beautiful building in warm red sandstone and stands in an extremely pleasant churchyard with commanding views over the surrounding countryside.

There are two other places of worship in the village, Dunchurch Methodist Chapel in Cawston Lane and the Baptist Church on the outskirts of the village, on the Coventry Road.

At the heart of The Square, in the middle of the village is The Dun Cow, named after the local myth. Legend has it that the Dun Cow was a ‘monstrous beast four yards high and six yards long’ which provided milk to the locals. A witch made it go on a murderous rampage until it was slain by Guy, Earl of Warwick.

Other features around The Square are the Maypole and Village Stocks and the statue of Lord John Douglas Montague Scott (1809-1860) a 19th century landlord, Scottish M.P and younger brother of the 5th Duke of Buccleuth.

At Christmas, it has been an annual tradition for a group of pranksters to secretly dress up the statue in the garb of a cartoon or T V character overnight. They have done this every Christmas for more than 30 years.

There is limited parking around The Green and in The Square.

Thurlaston is in a cul-de-sac location, as there is only one road into the village, connecting it to the B4429.

The village stands beside and overlooks the great expanse of Draycote Water.

Apart from the parish church of St. Edmunds, the most famous other building is probably the old windmill (which is now used as a private residence). 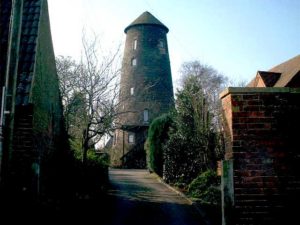 St. Edmunds is a Chapel of Ease to St. Peter’s in Dunchurch. It was originally constructed as a village school by William Butterfield in 1848 and was only used as a church on Sundays. It became a Church of England in 1905 and was fully furnished as a church in 1925.

Thurlaston Village Hall is also in Church Lane, on the right before the church.

Draycote Water is a reservoir and country park, owned and operated by Severn Trent Water. The reservoir was created in the 1960’s and was opened in January 1969 and is by far the largest expanse of water in Warwickshire. It covers more than 600 acres and holds up to 5 billion gallons of water. It is renowned as a site for bird-watching and there is a purpose built bird hide. Draycote Water is particularly popular with boaters, windsurfers and fly fisherman. Fly fishing is for Brown Trout and Rainbow Trout. The 5 mile perimeter road around the reservoir is popular with both cyclists and walkers.

Toft is a small hamlet and is known to have existed in the 17th century. It sits on a hill know as Toft Hill. Toft is now the home to a herd of over 200 Alpacas that can be seen grazing the fields around the perimeter of Draycote Reservoir.

TOFT Studio and Coffee Shop is based at Toft Manor, Toft Lane and is home to the TOFT luxury British DIY knitwear and wool company, offering 100% luxury wool and alpaca yarns and exclusive easy-to-make knitting and crochet patterns alongside workshops, cake and great coffee.

Grandborough is set in the heart of unspoilt Warwickshire farmland in the Leam Valley, practically on the banks of the River Leam, which flows just north of the village. There was a watermill (now a private residence) where the river passes under the road from Woolscott. In times of flood, the river flows over the road creating a ford. A road sign suggests that pedestrians and motorists should ‘Use causeway if flooded’.

The parish church is dedicated to St. Peter and is a very pretty church dating back to the 14th century. A notable landmark as you approach the village is the spire of the church, as are the two Wellingtonia trees which flank it.

The village War Memorial can be found close to the main entrance gates at the front of the churchyard.

The first church in Grandborough may have been a late Saxon chapel, held by Leofric, Earl of Mercia and his legendary wife “Lady Godiva”. They gave Grandborough and the surrounding lands to St.Mary’s Benedictine Priory, Coventry.

The present church was erected mainly in the 14th century and is chiefly in the Decorated Style with a little transitional Early English-decorated work.

In addition to St. Peter’s, there is another place of worship in Grandborough, the Primitive Methodist Chapel in Church Road (erected in 1856 and extended in1991). During the period 1840-50 there was a great revival in Primitive Methodism in Warwickshire and in 1851 Mr Edmund Timms of Grandborough obtained a license for his premises in the village to be used as a ‘preaching house’. Now known as the Grandborough Methodist Church, it is very active in the village.

The village also has a Village Hall (Benn Memorial Hall erected in 1897) and a number of old and mostly Victorian cottages.

Grandborough has an excellent country public house called The Shoulder of Mutton and it is very welcoming to walkers and cyclists. 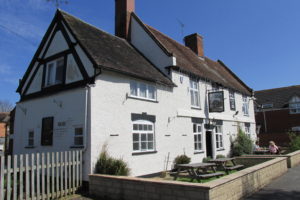 The Shoulder of Mutton at Grandborough

The former village school still stands. It closed in April 1974 and is now a private residence called The Old School House.